A strong high pressure system over the southern Tasman Sea is slowly moving east whilst a low pressure trough, currently over the eastern inland, continues to deepen and track to the southeast, bringing rain to the north and southeast. Heavy rainfall will begin to east about central and northeastern districts today, whilst developing about the southeast. Strong winds, damaging surf and abnormally high tides along the coast, but the areas of heavy rainfall will contract to the Southeast by the end of Tuesday or early Wednesday as the low pressure system heads off to the South Coast and a drier airmass follows in the wake.

HEAVY RAIN, likely leading to FLASH FLOODING, presents a SERIOUS RISK to areas of the northeast and south east of the state today. Districts of the Northern Tablelands, Northern Rivers and Mid North Coast will begin to see an easing trend in showers and rain into Tuesday afternoon. However the southern ranges, coast and Snowy Mountains will see development of heavy rain today as the low pressure system in the west moves towards the region. Due to extensive flooding across the east, localised moderate rainfall may also bring the risk of FLASH FLOODING, and in some areas, heavy rain and flooding may be LIFE-THREATENING.

DAMAGING WINDS, averaging 60 to 70 km/h with peak gusts in excess of 90 km/h are possible along the coastal fringe south of Seal Rocks from late this morning or early this afternoon. Winds should gradually ease much of the coast this evening, but the damaging winds may still remain along the South Coast overnight due to the low pressure system in the region.

DAMAGING SURF, which may lead to localised damage and coastal erosion is likely for areas of the coastline south of Moruya from this afternoon, as strong northeasterly winds build over the waters. Beach conditions in these areas could be dangerous and people should stay well away from the surf and surf exposed areas.

ABNORMALLY HIGH TIDES which may cause sea water flooding of low lying areas south of Moruya are also possible. Water levels could exceed the highest tide of the year during Tuesday morning’s high tide as a storm surge moves into coastal areas.

River catchments in this area are wet, bringing an enhanced risk of renewed RIVERINE FLOODING. Numerous flood watches and warnings are current. Latest updates at http://www.bom.gov.au/nsw/warnings/.

Widespread rainfall may also lead to RIVERINE FLOODING, and a Flood Watch is current for catchments on the western slopes. 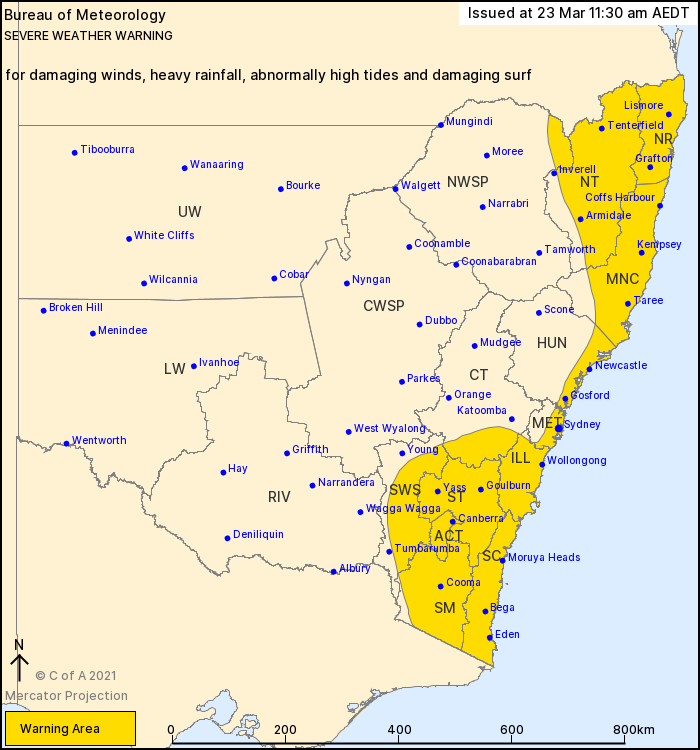 Latest forecasts: https://t.co/ZgxKG4e3dD or the #BOMWeather​​​​ app and follow the advice of emergency services. pic.twitter.com/l57Br0HvEv